THE MINSTREL. Eaves Green Road. Chorley. Lancashire. UK. PR7 3PF
CHORLEY’S NUMBER ONE VENUE FOR LIVE MUSIC
BJ’S ROCK IN THE BLUES CLUB
PRESENTED & PROMOTED BY LUCAS CAMPBELL
THE MAZ MITRENKO BAND – 18th June 2015
The Maz Mitrenko band returned to Chorley and entertained a packed crowd here, who relished the bands mix of classic blues and rock along with original material from these three exceptional musicians who had travelled from the heart of the West Midlands. This band always gives a fantastic show and from the very start took command of the proceedings. The first set kicked off with Freddie King’s classic ‘Going Down’ followed by ‘Deja Blues’ their first of six original numbers. ‘Tattooed Lady’ from Rory Gallagher, and the second original called ‘Drifter’ with ‘Accuse Me’ from Bo Diddley, and a brilliant rendition of Steve Earle’s ‘Copperhead Road’ and an echo from the seventies with ‘Bridge Of Sighs’ from Robin Trower, just a fantastic first set, the crowd where on their feet, the applause was deafening, tremendous.
The atmosphere was tangible as the crowd settled for the second set. ‘All Along the Watchtower’ by Hendrix started the second set with wonderful guitar work from Maz, I expected nothing less, and a good strong combination from the engine room, Pete Vickers on bass and Phil Brittle on drums, a very busy pairing indeed throughout the bands performance. Rory Gallagher’s ‘Calling Card’ again a marvellous rendition followed by ‘Mississippi Delta’ another original song with ‘So Long Chicago’ an original from the band that is on their next cd. The heat was turned up as the band played the Muddy Waters hit ‘Hoochie Coochie Man’ with ‘Misty Mountain Blue’ (Co Written with Doug Jones) and the last of the bands original works. ‘Walk on Hot Coals’ from Rory Gallagher finishing with ‘Hey Joe’ and ‘Purple Haze’ a crescendo of sound from the very able Maz Mitrenko band, just fabulous from start to finish.
Keith Blackledge,
Independent National & International Music Reviewer

Sunday the 25th and it was going to be an interesting day, 3 Gigs and Travel between each, such is the heady life of an unpaid, unemployed reviewer; sadly as I sit behind the wheel, the other G&T has to wait.
On the menu was The Prince Of Wales in Ledbury for Maz Mitrenko, the lovely Chantel McGregor in The Tythe Barn, Bishops Cleeve, and finally, the relaxed atmosphere in the company of Mumbo Jumbo, appearing in the barn at The Fleece Inn, Bretforton.

I knew of Maz Mitrenko, but had never caught one of his gigs, the opportunity to join the blues crowd at that mecca of music and bread making, The Prince Of Wales, could not be missed. Maz, along with Phil Brittle on skins and Pete Vickers on bass, were about ready to start as we eased in. The first chord struck, like a very short fuse to a stick of dynamite, striking up a bit of Freddy King and ‘Going Down’. Straight off, you know you are in for an electric blues set, passionately played by artists of the highest calibre. This is territory, that, had the Mississippi flowed North to the great lakes, and through Chicago, it would have been the perfect marriage. I like and appreciate the roots from the Delta, the extremities of hedonistic rock guitar tugging at the blues, I’m not so sure about.
Maz and his band, hit the right note, with songs from Rory Gallagher, and of course, Hendrix. Taking his guitar riffs far enough, but leaving room to appreciate the bass rhythm from Pete and the beat of Phil’s timpani to come over. Phil Brittle has been around awhile, a journeyman drummer? No, he’s a bit more than that, a gypsy, dancing across the skins as he tickles and crashes the cymbals, absorbing to watch; the music etched into his facial expression.

‘Hold on to the Blues’, seems very appropriate, and it’s pure Maz, loud and raw, a slice of Rory grit, the sandwich is completed by the slow, beautifully presented, Darkness at the heart of the blues, superb guitar, soulful base from Pete, and Phil is lost in that inky blue sky. BB King’s ‘Thrill Has Gone’, so switch over to more Rory, and another from Maz, with ‘Drifter’. The band close for a break; but not before a stunning ‘Hey Joe’, rarely bettered I suspect.
The show continued, bits of Rory and Hendrix were again interspersed with songs from Maz himself, then a quick turn up country for a fabulous, ‘Copperhead Road’. Maz continued with his own, ‘Misty Mountain Blue’, dripping with the honeyed notes from his guitar. We neared the end, more stunning stuff, Robin Trower’s, ‘Bridge Of Sighs’, and just as I was racing away for Chantel, ‘Sweet Home Alabama’, followed me down the street.

Without doubt, I will be looking out for Maz again in the near future.

– BJs Rock In The Blues at 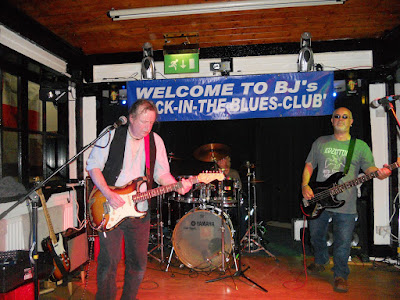 This powerful blues rock trio driven by Maz Mitrenko on lead guitar and vocal, along with Pete Vickers on a humming electric bass and Pete Rogers (subbing for Phil Brittle) on drums, travelled from the heart of the West Midlands to entertain a select crowd here at this brilliant venue in Chorley.

The band are currently working on a new CD, out later on in the year and Maz gave us a flavour of what’s to come with three original works, the first of these entitled ‘DA ‘Ja Blues’, the second ‘Darkness (At The Heart Of The Blues)’ and the third called ‘Misty Mountain Blue’, co-written with Doug ‘Blind Willy’ Jones from Tennessee. All three were good honest blues tracks which sets the benchmark for the rest of the tracks on the album I’m sure.

Covers by Jimi Hendrix ‘Hey Joe’, ‘All Along The Watchtower’, and a great rendition of ‘Copperhead Road’, with two acoustic numbers by Maz, the first, ‘Out On The Western Plain’ and ‘Goin’ to My Home Town’ completed the first set.

The second set was frankly nothing short of brilliant, this was dedicated to the late great Rory Gallagher, who at 47 was taken far too early, for whatever tragic reasons.

Opening the set with ‘Messin’ with the Kid’, ‘Calling Card’, ‘Tattooed Lady’, ‘I Could’ve Had Religion’, ‘Brute Force and Ignorance’, ‘Walk On Hot Coals’, ‘Too Much Alcohol’, ‘I Take What I Want’, ‘Shadow Play’/’Bullfrog Blues’ – it just took you back to that fantastic era.

A great night, by a fantastic band, playing original and classic rock /blues – it doesn’t get much better than this.

Featuring four Mitrenko originals and seven, fairly varied, covers (some quite surprising), ‘Comin’ Thru’ have pretty much got all bases covered. Certainly, this is an easy-to-take blues package; Mitrenko manages to keep his individual talents well proportioned and controlled. His solid and never over influential rhythm section of bassist Barry Newey and drummer Dave Tandy lay down the perfect, groove laden backdrop which Mitrenko uses as a springboard to bounce his instrumental and vocal outings off.

The album has a clean and precise feel to it; at times it’s slickness almost gets in the way of the ‘blue’ ethos. But, on the whole, ‘Comin’ Thru’ gets the job done effectively and efficiently. If I have just one criticism it would be that ‘Comin’ Thru’ could do with a bit of ‘dirty’ stuff, some real lazy, gritty stuff, a touch of passionate aggression, just to break up the relatively laid back but highly polished material. As it is, it reminds me of some of the early British blues albums of the mid to late 60’s in its delivery and resultant feel – maybe slightly undercooked and sitting on the lighter side of the blues rather than letting things rip and letting go.